Kem Senou Pavel Daryl is a 21 year old cameroonian student studying at Yangtze University and living in the Chinese city of jingzhou.

When he first contracted the coronavirus, he feared for his life.
He was suffering from a fever,a dry cough and flu like symptoms.
“When I was going to the hospital for the first time I was thinking about my death and how I thought it was going to happen,” he said. 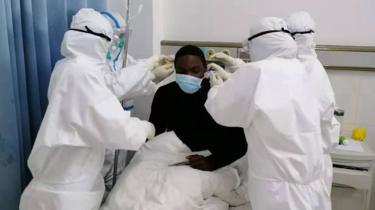 Despite the amid aid given by countries to it’s citizens living in China, Kem Senou Pavel Daryl wasn’t ready to go back to Cameroon.
According to him, he didn’t want his people to contract the deadly virus.
The name Coronavirus comes from the Latin word Corona which means crown or halo.
The virus became publicly called Coronavirus because when under an electron microscope, the image of the virus looks like a solar Corona.
Coronaviruses according to World health organization is a family of viruses that causes illness which ranges from the common cold to severe diseases such as Middle East Respiratory Syndrome (MERS-CoV) and Severe Acute Respiratory Syndrome (SARS-CoV)
After been under a 14 day quarantine in his University dormitory, he was sent to the Chinese hospital where he was under a 13 days isolation.
He was treated with Antibiotics and drugs typically used to treat Hiv patients.
Kem, started showing signs of recovery after two weeks.
A CT Scan was conducted which showed no trace of the illness,making Kem Senou Pavel Daryl the first African to be infected with the deadly virus and the first to recover.
The Chinese state covered Kem’s medical bills due to the friendship between China and African countries.
Upon his release from the hospital, Kem has no interest in going back to Cameroon and wants to focus on studying.
“I don’t want to go home before finishing studying. I think there is no need to return home because all hospital fees were taken care of by the Chinese government,” says Kem Senou
Anyway the epidemic outbreak continues after Kem’s release from the hospital as many countries have started evacuating citizens from the country.
Ghana has reportedly sent financial assistance to it’s citizens and is also  considering evacuation just like Kenya.
Kem Senou Pavel Daryl, still has no plans to return to Cameroon.”
It would be a bad and dangerous idea. The biggest fear I had from the virus was psychological and emotional. Going back home is not an option now.” – he said.
China is currently Africa’s largest trading partner and the ties between the two have blossomed in recent years.
Source: bbc.com
Image credits: bbc.com
February 17, 2020

Video of Late Papa J In Sick Bed At Korle Bu Before His Sudden Demise Pops Up.

Nigerian Patient On The Run After Finding Out Coronavirus Status.