Salma Mumin Has To Render An Apology Or Face Lawsuit — MTN Ghana threatens.

Ghanaian Actress Salma Mumin has been called out by telecommunication Giants, MTN Ghana to render an apology to them or face lawsuit over her false Momo Claims.

It is recalled that the “No Man’s Land” actress on 22nd October 2020, accused MTN over Gh10K Momo Fraud and openly stated that MTN is not safe anymore to her fans, in a post sighted on her official Instagram page.
MTN Ghana has finally replied with a shocking revelation and also threatens the actress to render an apology to the company in a 24 hours ultimatum or face legal action. 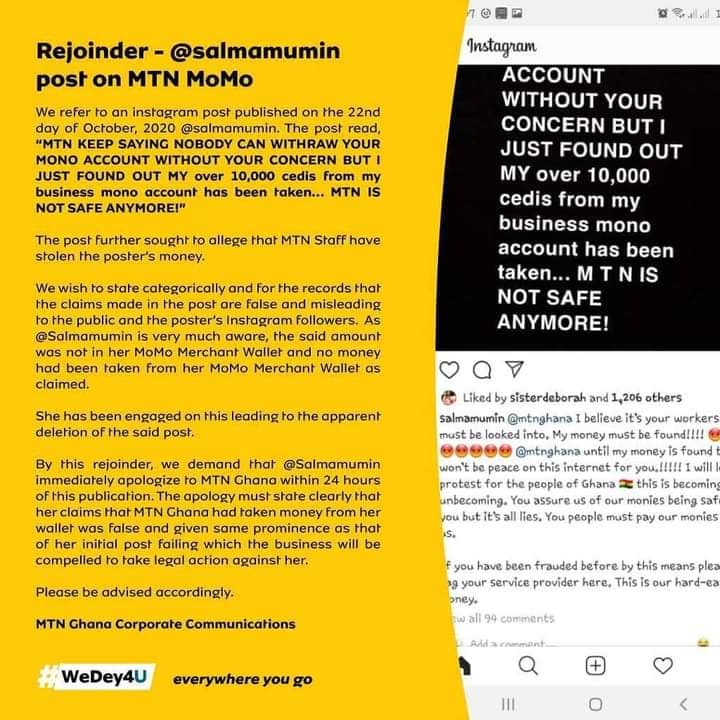 According to MTN Ghana, Salma Mumin’s claims are false and misleading to the public and her Instagram followers, as the actress is much aware the said amount was never in her Momo Merchant Wallet or been taken from her wallet as claimed.
Whiles most people have acclaimed that some Ghanaian celebrities are attention seekers, Salma Mumin’s motive behind this remains unknown, and we’re still looking forward for her response to MTN Ghana.
October 24, 2020